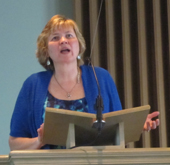 Christy Waltersdorff became the full time pastor of the York Center Church of the Brethren in Lombard, Illinois, in March 1996.

Christy graduated from Penn State in 1987 and in June of 1990 she received her M.Div. degree from Princeton Theological Seminary. While a student at Princeton, she gained experience at Mercer Medical Center as a chaplain intern and as a counselor at a shelter for battered women. During 1991-1996 Christy was at the Westminster Church of the Brethren in Maryland where she was part of a team ministry.

Christy lists her priorities in ministry as relating to all ages, preaching and worship, and pastoral care.

Christy is married to Marty O’Brien.

Jo Miller is Church Secretary for York Center Church of the Brethren.